So I love my 50mm lens. I've told you before why it's a great purchase but essentially here are the reasons in a nutshell...

However, the problem with the crop sensor is that it magnifies the 50mm to 75mm which really is quite zoomed in and I found that at parties and nights out (where this lens should come into it's own) the pictures were too close and I was having to stand miles away which can be an issues in a busy restaurant etc. Also, in properly low light the lens would struggle unless the ISO was boosted - sometimes to unusable levels e.g. 3200.

What were the choices (aside from buying a flashgun)?

This didn't solve the low light problem as the aperture was still only f1.8 max (or so I thought) but it did mean I would have a wider amount included in each picture. With the cropped sensor it still equated to 52.5mm but that was greatly improved on the adjusted focal length of the original 50mm.

That was reason enough but I'd also read some reviews saying that it had better colour and contrast than the 50mm so after it arrived (today) I decided to put it to the test.

Here is a series of pictures taken at different apertures in low light. I fixed the ISO at 200 and let the camera choose the speed (not much of a difference there). 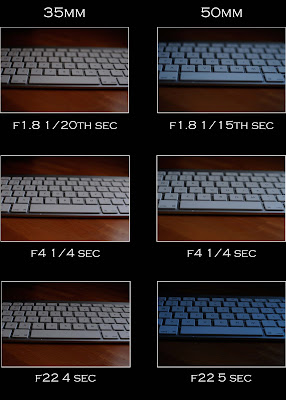 I think the most immediate thing that stands out is in fact the contrast and the colour like that review said (and how consistent the 35mm is). At f4 there isn't much of a difference but at either extremes there is huge differences. Although the shutter speed is much the same for both lenses and probably won't help much in low light conditions there is a massive difference in how "usable" the pictures are.

I also noted (although it's hard to see on this blog) that the bokeh with the 35mm (especially at f1.8) is far superior and much more aesthetically pleasing. The 50mm blur is super soft at that aperture and, blown up, looks terrible.

A final point is that the 50mm needed a 35cm minimum distance from the subject to take the picture whereas I could still focus at 20cm with the 35mm which just gives a bit more flexibility.

So all in all I think it was a good purchase and I don't think I'll be using the 50mm again. Having said that, the 35mm is for DX sensors and the 50mm can be used with both a cropped and full-frame sensor so if I ever get round to buying a Nikon D3x or something insane like that then at least I'll have one lens I can use!
Posted by Zain at 6:55 PM