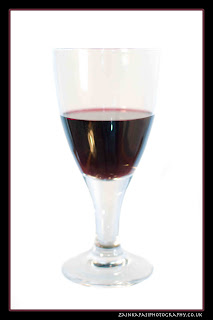 So this shot here looks like one of those fancy brochure pictures but actually it's quite simple to do.

This is something that puzzled me for a while - how do you make the background and the table disappear from the shot? I'd tried loads of variations of curved paper and home made soft boxes but nothing gave the result I was looking for. I'd also played about with the exposure settings and various other software tweaks but I really wasn't getting anywhere. Then I spotted a picture of how this is carried out and gave it a shot. The answer? Well the glass is resting on a sheet of perspex with a white backdrop and various forms of lighting cause the "white" elements to fall away. 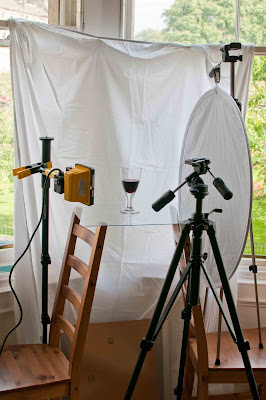 So here's a pic of my set up. Simple enough? It should be but B&Q don't seem to stock perspex so I used a sheet of glass from a picture frame. Gave the same effect but I wouldn't want to use it too often in case I dropped something on it and smashed it. The light for the shot comes from one flash set to slave mode and I was using the onboard flash as a commander unit (one major plus for Nikon over Canon which can't do this on most of their cameras). There is a reflector to bounce back some light and there is also a workman's light which is pretty cool as it'll clamp onto most things and most angles.

There are some issues with this set up, namely a white wall would be far better as there was lot of wrinkles in the sheet that showed up before processing. Also the lamp I have is only 120W and most studios use 400 - 500W lamps. An probably the most important issues is CLEAN THE GLASS!!! This glass was boggin' and I didn't notice it until I zoomed in on the pic. Then had to spend ages editing out my grubby finger prints etc.

So hope that gives you something to try with the camera indoors when it's raining outside - which is frequently the case in Scotland.
Posted by Zain at 5:03 PM 1 comment: