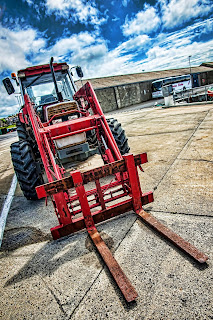 No this isn't HDR. People seem quite fascinated with the HDR process but it requires a fair amount of work both with the initial shots and also with the post processing which requires special software. Some cameras will do it "in camera" now but it's really not the same as true HDR.

So how did I do this shot? Well to be honest it was quite easy. First it's worth knowing that architecture and industrial things look best in HDR (in my opinion). I took this picture at the harbour in Kirkwall on Orkney.

I opened the picture in Photoshop elements (I'm currently using version 10). Once I'd done that then I went to my filter list and opened up Topaz Adjust which is a set of "plug-ins".

Then I used the HDR set of filters and tweaked some of the colour settings and added a vignette. Back in Photoshop I cropped the picture and cloned out some of the lamp posts and people with a few strokes of the Heal Brush. I reduced the noise and then finally added the watermark on the warehouse in the back right of the picture using a new layer and the distort tool. 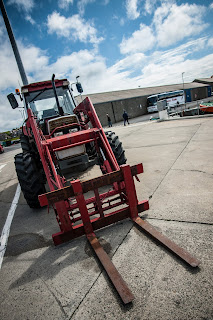 All in all very quick way to get an HDR-like shot without all the rigmarole of several differently exposed shots. This is what the original looked like when I first exported it out of Lightroom. You can see there is a big difference between the two shots and the first one really does look HDRish. Not bad for a couple of minutes work.

Recently, I was up near Fintry doing a photoshoot for a friend of mine who is starting a new brewery which you can read about soon at http://www.fallenbrewing.co.uk/ Please note that you can click on each picture to see a larger view.

When I was up there I couldn't help taking a shot of the waterfalls at the Loup of Fintry which I then posted online. A friend of mine has recently purchased Adobe Lightroom and was asking how I did this shot - so here goes Sam. Yes it looks totally fake and over processed but it's a bit different and is easily achieved with a few lightroom tweaks so here goes...

This is the original shot straight out of camera. You can see that the view was pretty amazing. I had the camera on a tripod and had the f-number at f22 which allowed a long exposure of 1/4sec which was long enough to allow some movement in the waterfalls. It's not a bad shot but the sky was very bright so I had to underexpose the shot a bit to retain detail in the sky and the water. This means that the foreground is quite dark which we will fix as we go along.

CROP
So from the first shot I cropped and straightened the image a bit. It is a small change but I think it lends something to the shot and makes the waterfall more of a feature than the sky. Note the tree in the upper left and that I didn't crop it out of the picture.

CLARITY +100
This is perhaps the most crazy change to the picture. Pushing up the clarity gives almost an unreal feel to the shot and it's almost like an HDR picture at this point. Overuse of clarity is not usually a good idea because of this but for this landscape I wanted it to look over-done and excess clarity is a good place to start.

VIBRANCY +50 SATURATION +15
This is where I added a bit of colour to the shot. I think that vibrance is a bit more subtle and saturation can be very very wild is overused. But again, this shot was something I was going for with this image so I pushed both sliders up quite far.

LIGHTS +20 SHADOWS -15
As I said earlier, the picture was quite dark to retain some of the highlights in the sky and water. The "Lights" slider brings back some brightness to the picture. Decreasing the shadows slightly adds a bit of contrast but this has the knock-on effect of darkening the picture again so this has to be countered which we will do next.

EXPOSURE +15 VIGNETTE -10
To brighten the image I increased the exposure to the point where I was almost losing the highlights again. Beware of the exposure slider though as it has a blanket effect on the whole image and can cause problems. With this image a bit brighter I then added a slight vignette which helps to draw the eye into the photo.

PHOTOSHOP TWEAKS
Finally I put this back into Photoshop. I do like Lightroom and it does have a brush that you can use for local effects but I'm so used to the dodge and burn tools in Photoshop that I often go back to this and do some final processing to complete the shot. Here, I've added an additional bit of brightness and then painted in a bit more highlights in the the waterfall and the surrounding grass and rocks. Then I painted some more shadow back into the sky and then voila, the picture is finished. Hope you like it Sam!
Posted by Zain at 7:07 AM No comments: