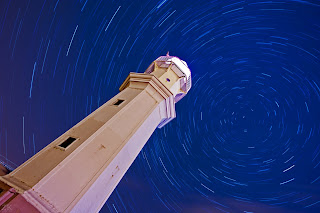 I've been meaning to try this for ages but wasn't really sure how to go about it. There is a program called startrails.de which is a PC based only and that was frustrating as I spend more time on my Mac. However, I found another program called Starstax which works on the Mac.

So to take a photo like this you need to set everything up in the cold and the dark first. This shot entailed using a wide angle lens (at about 20mm) and set to a wide aperture of f5.6 and an ISO of 200. The main focus was on the light house but with the wide aperture it made the stars slightly blurry which makes softer trails once processed.

Then I took about 40 shots in a row - each one a minute long (hence frozen fingers and toes due to the 40mins that it took to do).

Once you've got all your shots you stick them into lightroom and process the first one to get it bright enough and plenty of stars exposed. Then "sync" all the shots so they are processed the same way. Export them into a new folder of JPEGs.

Then open up Starstax and simple add all the photos and merge them. That'll create the final image that should look like this one (or hopefully a bit better even!).