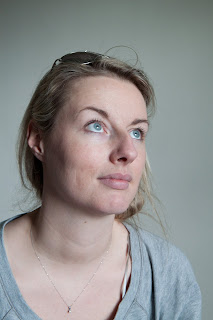 A friend of mine has been getting quite into his photography recently. It's really nice at that stage to compare yourself to others and see how people do things differently from you and what various techniques people employ. Of course the best way to learn is by doing and soon it all starts to make sense. Anyway, this chappy took a portrait shot of his other half and we used the RAW file to see how each of us process our shots. This is by no means exclusive and I'm sure plenty of the photographers that I look up to would shun what I've done here and do things completely different. Oh well, I only spent 10 mins on it so tough, this is all you're getting. So this is the original. It's not a bad wee shot. It's ambient light only from camera right but that is introducing some shadow on the the right side of Sam's face. The background is quite plain which is ok but it therefore doesn't really lend itself to depth of field. It's also a bit similar in colour to her top and eyes and skin tone so this makes everything a bit bland. As with every single person I've ever photographed, there are routine skin blemishes but those are easily dealt with. 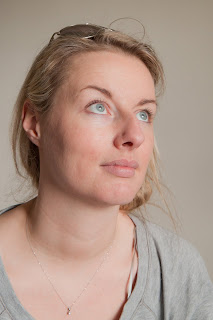 This is my friend's version of the shot after processing. I'm not sure of his setting but there are a few things that are worth saying about it - from a personal view point of course. First the colour. It's a bit too warm. Not that that's a bad thing but the issues here is all the colours involved in the picture are from the same palate and this makes every aspect of the picture quite samey. Also there is the issue that warming up a whole picture also warms up the blues to orange and I've got a feeling that in real life Sam's eyes are blue but here they have gone grey due to the warm white balance used. There is that lock of hair at the top of the shot which is quite distracting and should probably be cloned out. I also think that the tone makes her look a bit flushed and although some of the blemishes have been removed, overall I think that there is a loss of contrast in the face. I think also there is some fill light that's been used on her right side and that helps with the shadows but that again reduces the contrast and there is a lack of "pop" in the result. 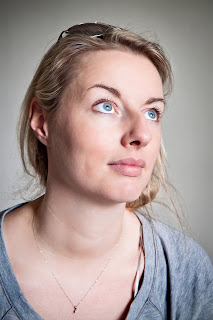 Ok, so this is my version. I realise that it's a bit overdone but this helps illustrate the points I was making above. So what have I done here. Well I opened the original in lightroom. I've used the following settings.
White Balance temp - 4793K tint +14
Tone Dropped the exposure by -0.25 Recovery 15 fill light 40 blacks 5 brightness +53 contrast +36
Presence Clarity +23 Vibrance +13 Saturation -4
Tone Curve Highlights +11 Lights +24 Darks -1 Shadows -5 The only other thing I did in light room was to introduce a post crop vignette of -14 to separate the subject from the background a bit. Then I opened the newly saved JPEG in Photoshop and cloned out the hair strand at the top. I used the heal tool to remove a some of the skin blemishes next. Finally I then saved the shot and then opened it again in Portrait Professional to even the skin tone and play with the eyes. One thing I would say about this kind of software is that it is very VERY easy to overdo is and with only a small amount of tweaking this shot already is beginning to look quite fake so be subtle. Now, if you don't have this program there is still things that you can do. You can either use the brush in Lightroom and change the contrast and saturation of the eyes. Or you can use the magic lasso tool in Photoshop and highlight the eyes and then play about with the levels and the saturation to achieve a similar effect. Also the dodge and burn tool helps to locally increase highlights or shadow to create some local contrast. It's also worth noting that if you use the Lightroom brush you can put the sharpness slider right down and that actually introduces some subtle softness to skin too. Anyway, I hope you get the drift. There are millions of possibilities and eventually you'll find a way to make a shot work in Post Processing that didn't necessarily work in-camera. Good luck. Z
Posted by Zain at 10:32 PM No comments:

So I was staying up in Perth last night and this morning after breakfast we headed out for a walk and that took us up to Kinnoull Hill. On top of the hill over looking the Tay Valley is a Victorian folly. I'd seen this the day before and wondered what the view would be like from up there. A folley, I was later to learn, is a fake or decorative building that the Victorians would erect to give the area a bit more style and kudos. They usually served no other purpose other than to raise the profile of the resident gentry so that they could boast about castles on their land etc. Anyway, the issue today was that I didn't have my wide angle lens with me. This presented a problem - how was I going to get everything in shot? Also my wide angle has a 77mm filter and these don't fit my other lenses to I was a bit screwed if the sky was going to be very bright. Yes there are other ways round this but I decided to employ some other techniques and see if I could get something decent. Firstly, I decided I wanted a panorama. That meant taking a series of shots from the left hand side of the view through to the right and then stitching them together in photoshop afterwards. But as I said, I didn't have any filters that would fit the lens that I was using so I decided to employ that old love/hate technique of HDR. So here are the first set of shots. 4 portrait orientation shots each of which were made up with 5 different exposures. The dark shots catch the highlights and the bright ones pick up the detail in the dark areas. Merge these together and you get a shot that has detail every where. Below are the 4 shots before the merger.

So that bit above is called tonemapping and I use Photomatix to do this normally. Once in photoshop, I went to "new" and then opened a "photomerge" file. You then take the shots you want and add them to the open window then merge the files. I just used the auto settings and it turned ou quite well. So below is the result of this.

Ok, so the above shot is ok but there is a few things that don't look right. Mainly the colour and the contrast are a bit off so there are plenty of things that can be tinkered with in photoshop. I tend to boost the colour a wee bit and then use a lot of dodge and burn manually to pick out some more detail. Also a bit of vignette helps at this point too. This is a bit of a rush job as I'm back at "real" work tomorrow but I wanted to get this post up.

So the next thing I noticed about the above picture is that when you look at it closely there are some real issues. These mainly come from the fact that each of the shots in the pre-photomerge are a series of several shots. Therefore to take these the camera fires off 3 or 5 or 7 or 9 snaps (depending on how it's set up) in a row at different exposures. During the time it takes to take these shots things move! This is all well and good if you are taking an HDR shot of a building or something static. However, these pictures had moving cars and branches etc in them. This means that each of the 5 shots that I used to build each of the HDRs for the above panorama has slight "ghosting" effects. Up close the branches look a bit blurry or there are trails of cars (usually grey) along the road. Photomatix does a decent job of removing these but it can't deal with all of them. So is there an option to fix this? Yes. Some people spend hours and hours cloning out all the problem bits which essentially erases them from the picture. But as I said this can take a long time. It does give a good result and if you have a lot of time then this is a decent way to go. However, there is another way round this and it's by doing what's called a "pseudo-HDR". The difference with this technique is that you only take one shot instead of a whole series of shots. You then use the RAW file to create an underexposed jpeg, a normally exposed jpeg and an overexposed jpeg - hence three different exposures from a single photograph. This means that these are all identical shots so there are no waving branches and moving cars etc. I did this with three different shots the same way I did the panoramas above (but from a slightly different location) and then dealt with them the same way as the "proper" HDR shots. This is the result and you can see that it's not that different from the second shot in this post. Decent result from only 3 photographs in comparison from the 20 that were used to create the first panorama.

Don't worry, this post is almost at an end. After a few tweaks in Photoshop here is the final result and I think that this might be the way forward for HDR when there are moving objects are involved. I know there are some real masters out there that don't need this in their trick bag but I think I do mainly because it takes me so long to do a normal HDR. Anyway, hope this jibberish all makes sense and if you've got any question then please leave a comment and I'll do my best to answer it.

So today I'm going to do this walk... Kinnoull Hill in Perth. Unfortunately, I didn't pack the wide angle lens which is going to cause a problem as the filters etc are 77mm and they don't fit the lenses that I've got with me. So what are my options? 1. Well I have a 24 - 85mm with me so I can shoot at 24mm and hope that it's wide enough and then try to bring in a filter in Light Room to darken the sky. 2. I can shoot in HDR 3. I can try a series of portrait orientation pics and do a panorama 4. As above but bracket them all and put together an HDR panorama So I'm going to try them all and then post the results later today. Fingers crossed that I get something good as the weather look pretty dreary just now and there is no signs of it brightening up. There is an old Victorian Folly up there and that should provide some decent foreground interest although I'll not be on my own so I'm sure the non-photographer walkers are going to get pissed off with my photo antics on the hillside. Watch this space...
Posted by Zain at 10:29 AM No comments: