So I've mentioned white balance before. It took me a while to really understand what it means but now that I know what this is I find it difficult to look at older shots without getting frustrated. Primarily the issues show themselves up in a wedding I shot a few years ago where the brides dress is yellow/orange inside the church. At the time I didn't even notice but now that I know what I'm looking at I would suggest that you all learn about this sooner rather than later.

The most important rule in all of this is - if you have the ability to shoot in RAW as opposed to a JPEG then you MUST!!! RAW files can be fixed afterwards with software and it doesn't matter how it looks in camera however JPEGS are much harder to fix afterwards. 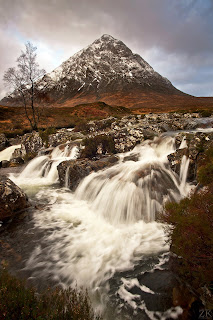 And now for another example. If you look at this first shot of Buachaille Etive Mor you perhaps don't notice anything wrong with it. However, if you really have a close look at the snow on the mountain and the water in the foreground you can see that it's not quite the right colour. It actually looks a bit yellow/orange. That's because I processed this with a higher temperature - 6411 Kelvin actually.

After looking at this for a while I decided that the shot was too warm and that it didn't look right. Afterall snow is cold and this actually makes the shot look too warm. So I went back into Light Room and reprocessed this too make it slighter cooler (not that it isn't already a cool shot! Lol). 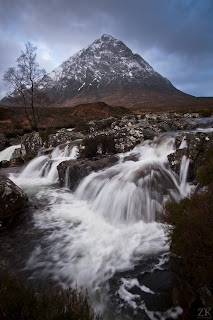 So with a bit of tinkering I moved the white balance temperature slider down a few notches to 5350 Kelvin and the result was this shot. You can see that it's a bit colder looking and that the whites are now white and not yellow. It I'd moved the slider further down to , say, 4000 Kelvin the water would have turned blue so it's important to get it just right.

Having said that. Some shots benefit from a bit of warmth especially portraits so sometime is worth notching a shot up a few Kelvin. Anyway, as always, you should experiment as much as you can and I hope you find this post useful.