It's taken me a while to figure out what the difference between a full frame sensor and a cropped sensor is. There is loads of detail on line about these 2 types of sensor but I think what mattered most to me was to do with wide angle shots and zoom lenses.

A few months ago I bought the Sigma 70-200mm f2.8 and a mate of mine stated that actually it was 105-300mm on my camera. It took me ages to understand what he was going on about and it wasn't until I stumbled onto a picture like the one below that it finally made sense. 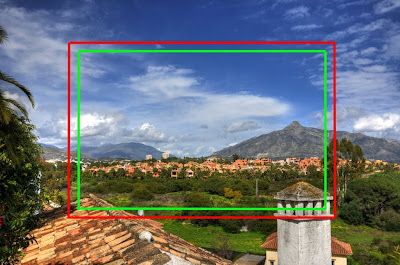 This piture was taken in Puerto Banus in Spain and shows the famous "La Concha" mountain. If you imagine that the full picture is what a 35mm film camera would take. It's also what a full frame sensor would take. Cropped sensors are smaller so the area of light falling on the sensor is less. The red rectangle is the 1.5 crop of Nikon's cropped DX sensors and the green rectangle demonstrates the 1.6 crop factor of Canons smaller sensors. As I said before the 200mm becomes 300mm on the Nikon DX sensors (this would be 320mm on the Canon - since 1.6 x 200 = 320).

You can now see how a cropped sensor artificially increases your zoom since if you were to print all three pictures at 6 x 4 inches they would all contain slighty different amounts of the view. This is great from a zoom point of view but at the other end of the spectrum it can be a problem.

When you have a wide angle lens you like the Tokina 11-16mm f2.8 and you are using it on a cropped sensor it actually becomes 16-24mm which means you don't get as much width as you would on a full frame. It can be frustrating but I guess it's something you have to put up with.

Comments and critisisms always welcome.
Posted by Zain at 9:11 AM