I was recently looking through some pictures from last year and I wondered what some of them would look like if I re-processed them from scratch without the previous final image for comparison. I 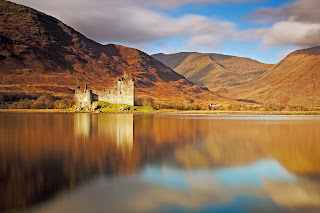 So this is the original final image of Kilchurn Castle up in the North West of Scotland on the banks of Loch Awe. It's a lovely site but I actually found it quite hard to negotiate a good shot of the castle. The spit of land that the castle is on is very narrow so doesn't really afford you a good angle. Also it was locked so I couldn't get inside to try something from there. Ended up on the opposite bank wading through about 500m of marsh land to get to where I took this picture from. Anyway, it was evening and the colours of the light and the surrounding countryside were quite orange and brown. This cast onto the castle and confused the white balance and actually it was quite difficult to make the castle stand out so there was a fair amount of over-processing done and a lot of dodge/burn (a very valuable tool which I should post about some day). The final shot is not bad but now looking back at it I think that it's a bit false-looking and quite surreal. The trick is to be either super-processed where it's obvious that your going for a stylized look OR to be subtle so that the viewer doesn't really notice it. I think that this shot falls somewhere in the middle and on retrospect doesn't do the scene justice. 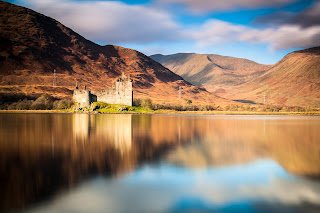 So with a fresh pair of eyes and a few months more experience it's interesting how the result has evolved. There's not a great deal of difference but I think it has a more natural feel to it. The castle certainly is less harsh looking and stands out more from the surrounding water and hillside. There is also a smoother overall finish to the whole shot. Interestingly, I removed the house to the right of the castle which I left in on the first shot but conversely left in the pylons which I did consider cloning out but felt they are a part of the Scottish countryside nowadays so left them in. The blacks in the hills are a bit blacker and the whites of the clouds (especially in the water) are a bit whiter and the blues in the sky/water are richer. I like it. Yes, I think I like it quite a bit more than the original so all in all a worth while experiment. At this point I would like to say again - YOU MUST SHOOT IN RAW!!! There is so much information hidden away in a RAW file that you can go back to it over and over again and reprocess it a million different ways to a level that a JPEG just can't compete with. It's also worth saying that the software for this moves on at almost a monthly rate so when I first processed this I was using Adobe Lightroom 3.0 (which then became 3.1 then 3.2) and now I'm using Lightroom 4 (well actually 4.1) and with each upgrade the possibilities increase and the quality of the result improves. Therefore it's always good to go back and have another look at older shots. This also gives you something to do when you're having a summer like we are right now - rain rain rain.
Posted by Zain at 11:52 AM